Recently, Mr. Ruan, the appellant represented by Zhilin’s lawyer, Mr. Di Zeng and Mr. Yanbo Li, wins the second instance of the Patent Invalidation Administrative Litigation in the Beijing Higher People’s Court of the People’s Republic of China. The second instance judgment correctly identified the technical facts of the patent and the comparison document, and revoked the patent invalidation decision and revoked the first-instance judgment.

This case relates to a die in the field of semiconductor device processing and packaging. The title of the involved patents in this case is “Manufacturing method with cylindrical structure and its manufacturing method”, with the Chinese patent number of 200410034758.3, and the patentee is Singapore Advanced Packaging Technology Pte. Ltd. Because this patent involves the basic technology of flip-chip packaging, this case is highly valued and widely concerned by the semiconductor device processing industry.

In 2014, Mr. Ruan filed an invalidation request with the Patent Reexamination Board for the patent right involved. In early 2015, the Patent Reexamination Board made a decision to invalidate the patent in its entirety. and Mr. Ruan dissatisfied with the decision. Mr. Ruan filed an administrative lawsuit with the Beijing Intellectual Property Court to revoke the decision. At the end of 2017, the Beijing Intellectual Property Court ruled to dismiss the lawsuit of Mr. Ruan, and in early 2018, Mr. Ruan filed an appeal with the Beijing Higher People's Court. After experiencing two failures, Mr. Ruan entrusted Zhilin Law to act for him to handle the second instance. Zhilin Law accepted the entrustment, and paid high attention to the case and immediately organized a team of experienced lawyers and patent attorneys to carefully study the invalid procedures and the case materials in the first instance, and searched a large number of relevant technical materials to understand the technical background, analyzed the focus technical characteristics. After many internal discussions and practices, clarify coping strategies and ideas, and carefully prepare agent opinions and presentations. Finally Zhilin lawyers won the case for client by their professional services! 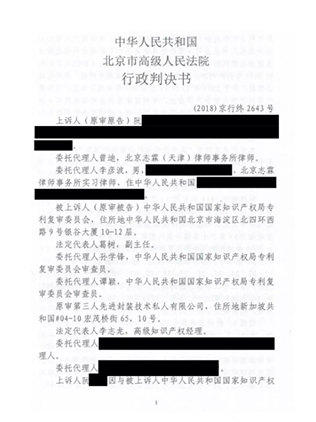