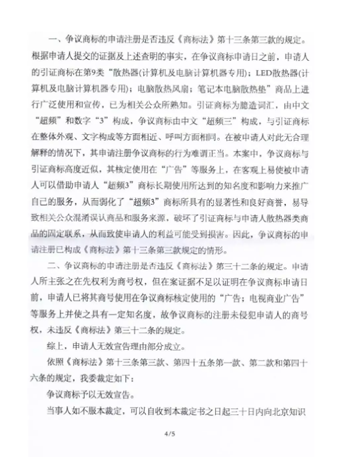 Recently, Zhilin Law won a great victory on the protection of well-known trademark.

Regarding the No. 16000744 invalidation request case for the trademark “PCCOOLER” which Zhilin Law represented, the Trademark Review and Adjudication Board established that the application for registration of the disputed trademark has constituted the situation as stipulated in the 3rd clause of Article 13 of the Trademark Law, and gave affirmation to Zhilin Law for the cross-class protection application of the well-known trademark, and the trademark “PCCOOLER” was established as a well-known trademark accordingly.

The cited trademark was applied for registration by Shenzhen Fluence Technology PLC on August 16, 2010, and was approved for registration on August 28, 2011. The approved use of goods are "computer; radiator (special purpose for computer); computer cooling fan" and so on in Class 9. The applicant submitted a large amount of evidence to the Trademark Review and Adjudication Board to support the fact that the “PCCOOLER” trademark had reached the level of the well-known trademark, and filed a request for invalidation to the disputed trademark on April 11, 2018.

In summary, in accordance with the provisions of Article 13 (3), Article 45 (1) (2) and Article 46 of the Trademark Law, the Trademark Review and Adjudication Board has made an invalidation decision to the disputed trademark.

Previous：Zhilin Law Firm was awarded as “National Excellent Cooperative Lawyer” by Luzhou Laojiao Co., Ltd. Next：Zhilin wins the Infringement Litigation of the Right to Exclusive Use of a Registered Trademark and Unfair Competition