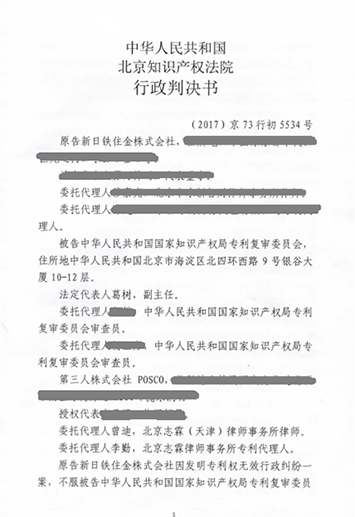 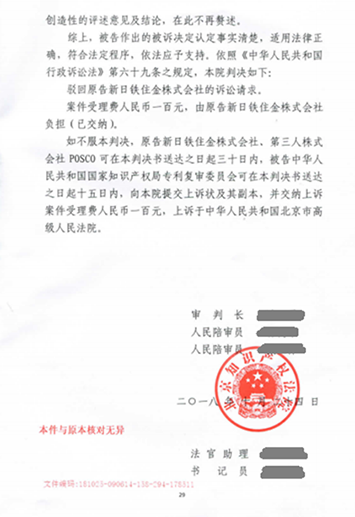 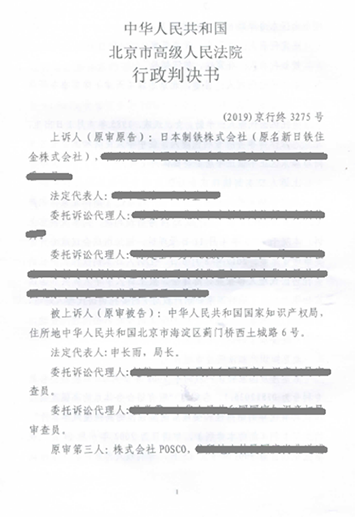 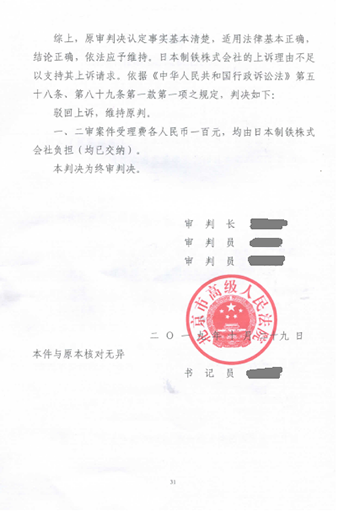 This case relates to hot-stamping aluminum-coated steel plates for automobiles, which are widely used in various types of vehicles after hot-stamping treatment of the steel products. This case is paid closely attention by domestic and overseas major steel mills, the outcome of this case will have a profound impact on the major steel mills.

After two requests for invalidation were not supported, in April 2016, POSCO entrusted Zhilin to file an invalidation request again for an important steel plate patent of Nippon Steel. Under the careful analysis and preparation of the Zhilin’s team, the Patent Reexamination Board of CNIPA made a decision in December 2016 to invalidate the patent in its entirely. Zhilin won the first victory for POSCO.

Nippon Steel dissatisfied with the above decision, they filed an administrative lawsuit and demanded that the invalidation decision be revoked. Upon receipt of entrustment of POSCO, Zhilin lawyers immediately formed a team and conducted an in-depth analysis of the claims and evidences submitted by Nippon Steel. After several times of discussions, the litigation strategy was determined. Zhilin lawyers refuted every point of view put forward by the plaintiff from the mechanism of solving the technical problems recorded in the patent specification and the explanation of claim of rights. Finally, Beijing Intellectual Property Court issued an administrative judgment, rejected the claims of Nippon Steel, the invalidation decision was maintained. Zhilin won the first instance trial for POSCO.

With dissatisfaction on the judgment of first instance, Nippon Steel filed an appeal at the end of 2018. After receiving the appellate petition, Zhilin’s team carefully studied the litigation strategy against their grounds of appeal. Finally, Beijing Higher People’s Court made an administrative judgment, rejected the appellant’s claims. Zhilin won the second instance trial for POSCO.